Myopia – An Epidemic Across The Nation (And The World) 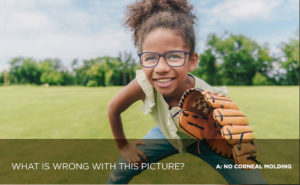 When we think of the word “epidemic”, it brings to mind visions of desolated villages in third-world countries, overflowing hospitals, and quarantines. However, there are other less deadly, but equally serious, health concerns impacting people on a global scale.

Myopia, also known as nearsightedness, is one of the most common eye conditions today. It affects almost 9 and a half million American adults and 30% of the entire Canadian public. On a global scale, 11% of the worldwide population has it and the medical community predicts these numbers will continue to rise.

How Big Is The Problem?

These statistics show just how prevalent myopia currently is:

Studies indicate that by 2050, myopia will impact nearly half of the global population – that’s approximately 5 billion people! Medical researchers expect the condition to increase by 40%, which means that roughly 60 million children will likely have myopia in the next few years. Individuals with high degrees of nearsightedness will reach close to 1 billion.

Due to these high numbers, which are increasing at an alarming rate, myopia is now considered an epidemic.

Myopia is a refractive error. This happens when the cornea of the eye, which is usually a round shape, instead has an irregular shape. This causes light to enter the eye and refract (bend) incorrectly, leading to blurry or cloudy vision.

Most people with myopia wear eyeglasses or contacts to correct the refractive error. The lenses refract light correctly, allowing your brain to process the images you see, resulting in clear, sharp vision. However, while these solutions enhance vision, they do not cure the condition itself.

How Serious Is It?

Myopia is about more than just blurry vision. Other symptoms include headaches, eye fatigue or eye strain. If left untreated, it can gradually lead to serious vision problems including glaucoma, early onset cataracts, macular degeneration, or even retinal detachment. The US National Library of Medicine considers myopia “one of the leading causes of functional blindness in the world”.

If you or a loved one is experiencing blurry vision or other symptoms of myopia, we can help. Speak to Satti Sarai about a personal consultation.

Myopia is very common in children. In fact, nearly 1 in 10 American children (9.2%) between the ages of 5 and 17 have it. It is usually diagnosed in the early childhood years and stabilizes by their 20s. The condition is often hereditary, so a child can develop nearsightedness if one or both of their parents have it, although certain environmental factors also play a role.

There is growing concern that in today’s digital age, the amount of screen time and decreased amount of outdoor activities are contributing factors to myopia development.

Natural sunlight – in reasonable doses – is good for the eyes, due to the Vitamin D found in the sun’s natural ultraviolet (UV) rays. So, spending more time outside is a good idea. In fact, a recent study found that children who spend 1 extra hour outdoors on a weekly basis had a more than 14% decreased risk of developing myopia.

Ethnicity and gender may also play a role. Myopia is more prevalent in people of Eastern Asian descent. Women tend to be diagnosed with the condition significantly more often than men.

Despite the rising numbers, there is hope. Typically, myopia control involves wearing glasses or soft contact lenses to give the patient visual clarity. Other treatment options include Ortho-k lenses, rigid gas permeable contact lenses that gently reshape the cornea, and atropine therapy, prescription eye drops that dilate the pupil and relax the eye muscles. Both Ortho-k lenses and atropine drops have been shown to slow down the progression of myopia.

Early diagnosis is critical for successful treatment and slowing down the development of the condition. Contact Village Eyecare and let us help you enjoy improved vision and eye health.